I had one of the most amazing leopard encounters last week. Here’s what happened :

We were driving on the Bandipur-Mudhumalai highway at around 5:30 in the evening and as usual I was scanning around on either side of the road for any interesting wildlife. As we passed by a stationary car full of family, I wondered if they were looking at anything. So I slowed down and scanned on the right side of the road and Bingo.. I suddenly see something move parallel to the road and it was a leopard. I pulled my camera out and started clicking away. 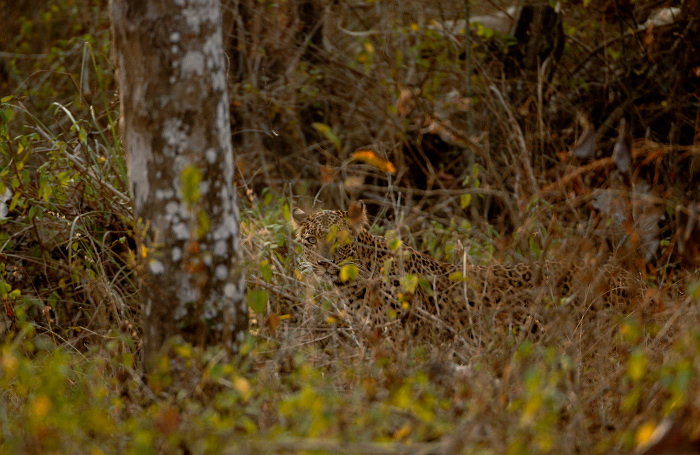 The first glimpse of the leopard

It walked away and we thought we had lost it. We drove ahead just in case and then in the bushes we found not one, but two leopards. Then we realised it was a mother and a cub. They were both sitting in the understory and there were a lot of vehicles moving around without realising there were these leopards sitting by the road. 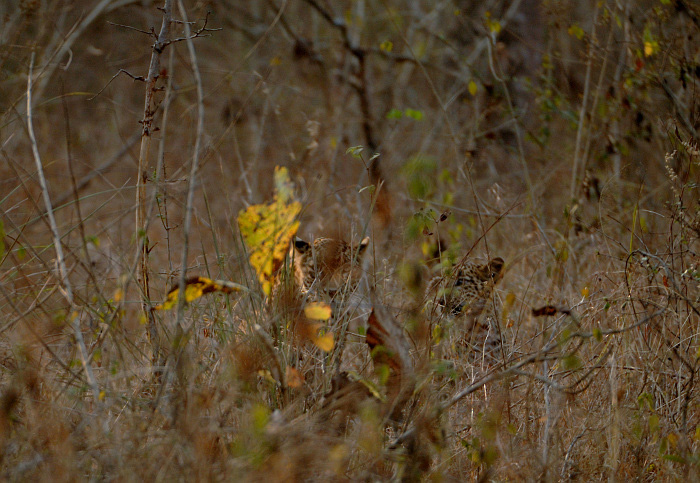 Mother and cub hiding in the understory

As I was photographing them, I suddenly witnessed something that I have never seen in the Indian forests. The leopard got up in a jiffy, kicked up a lot of dust and ran straight towards us. Since I was shooting, it just disappeared out of my view and I had to put the camera down to see what was happening. The mother came about less than 5 meters off my vehicle and then stopped. While this was happening, I could hear a Bonnet Macaque call onto the left. Then I realised that all along, the leopard was trying to ambush a macaque. I had seen this macaque earlier but had not paid attention to it and the macaque was next to my vehicle in the hope to get some junk food from us.

The macaque ran up a tree and started giving out the alarm calls. The leopard gave up the hunt at this point (assuming since the macaque already alerted the whole area) 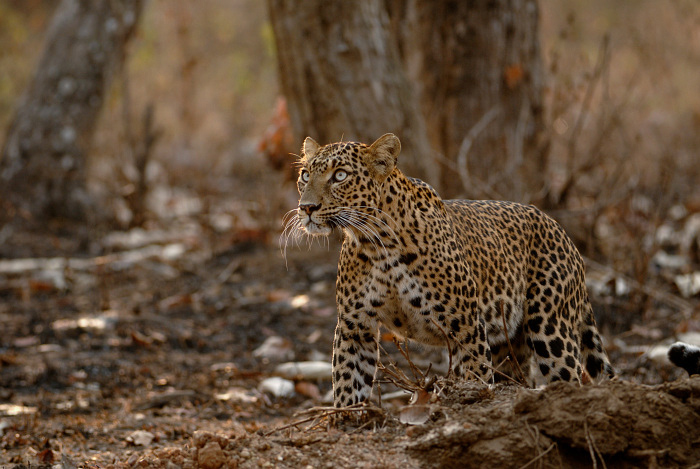 Leopard looking at the macaque

This is when the mother suddenly realised we were actually there. I do not know if she realised it earlier or not, but she looked at us very surprised, growled and then relaxed. 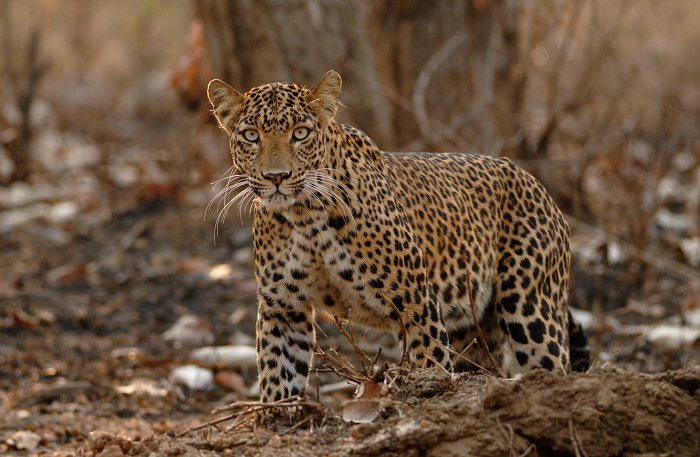 Leopard realised we were parked there

Somehow the leopard decided to give it a second try and bolted towards the macaque again. At this point it crossed the road in front of me and since I was in the driver’s seat, I could not shoot anymore. The leopard disappeared in the understory and I thought the leopard would try to climb up the tree to catch the macaque. 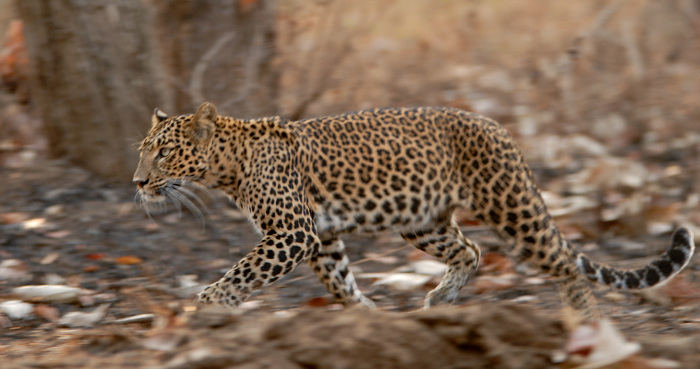 While all this was happening, the cub was still sitting at the same place looking at its mother. I guess the cub knows then the mother has gone out hunting and knows it must not move. After a minute or so, we saw the leopard again on the left side. It did not get the macaque and was now sitting and calling out. We realised it was calling its cub and we also heard the cub respond back to the mother.

Thankfully when the leopard crossed the road, there were no vehicles. But soon a lot of cars that were passing-by saw the leopard sitting on the left side of the road and were slowing down. Luckily none of them stopped. They looked at it for a few seconds and drove away. 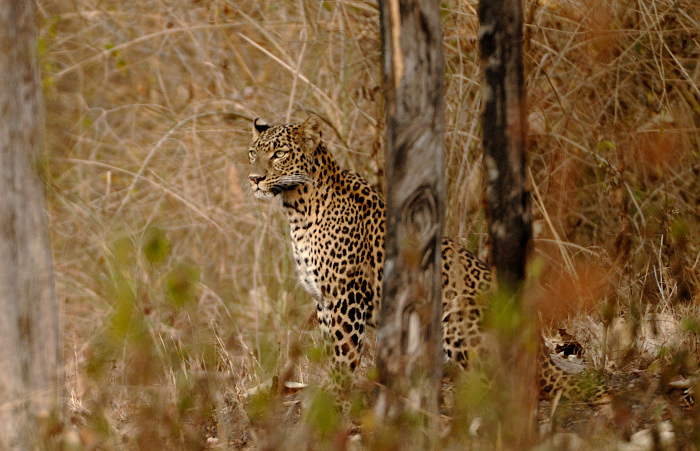 Mother waiting for the cub to cross the road

Then the worry started. The mother I assume was calling the cub to come over. So the cub slowly came out of the understory and was slowly walking towards the road with great caution. By this time we had driven a bit ahead as we didnt want to give away the leopards if any cars went by. Just when the cub reached the edge of the road, a huge truck came on the road and another car which was trying to overtake it honked.

The poor cub panicked and ran for its life back into the forest. 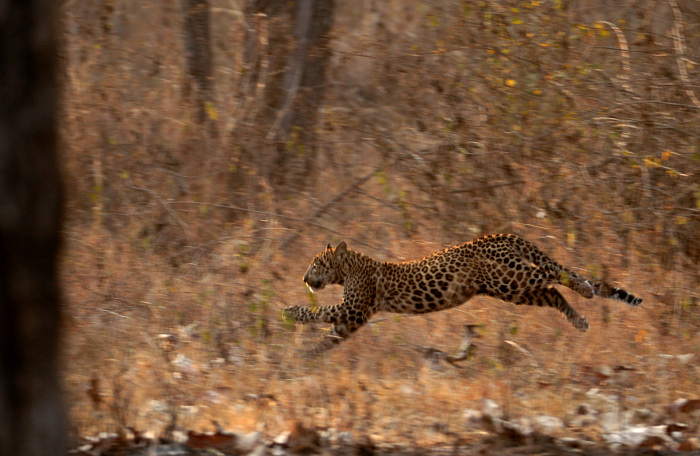 Cub running back into the forest

The mother continued to call and the terrified cub just sat down far away in the understory. After a few minutes, the mother walked inside the forest and we lost track of the cub too. We got really anxious as we didnt want any leopard road accidents, but we also realised, maybe the mother and cub were hesitant because of our presence. So we kept our fingers crossed and drove away

I really hope the mother and the cub got to re-unite later in the day. I actually wonder how many wild animals are suffering because of this busy highway through the forests.